The Broadmead Area Members Association is a volunteer group who truly value what makes Broadmead unique. Homes in harmony with nature, quiet streets, lots of parkland and walking trails, a sense of pride in our neighbourhood, and an active community association. Broadmead is simply one of the best places to live in British Columbia.

The Broadmead Area Residents’ Association is only as strong as its members. When BARA representatives approach Saanich council, B.C. Transit, or other government agencies, it does so with your collective  voice. Your valuable support is appreciated.

Thank you for becoming a member!

The BARA Board of Directors meets on the last Thursday of each month. Due to the current Covid-19 physical distancing protocols, meetings are held electronically. If there’s something you would like to bring to the attention of the board of directors simply email info@broadmead.ca 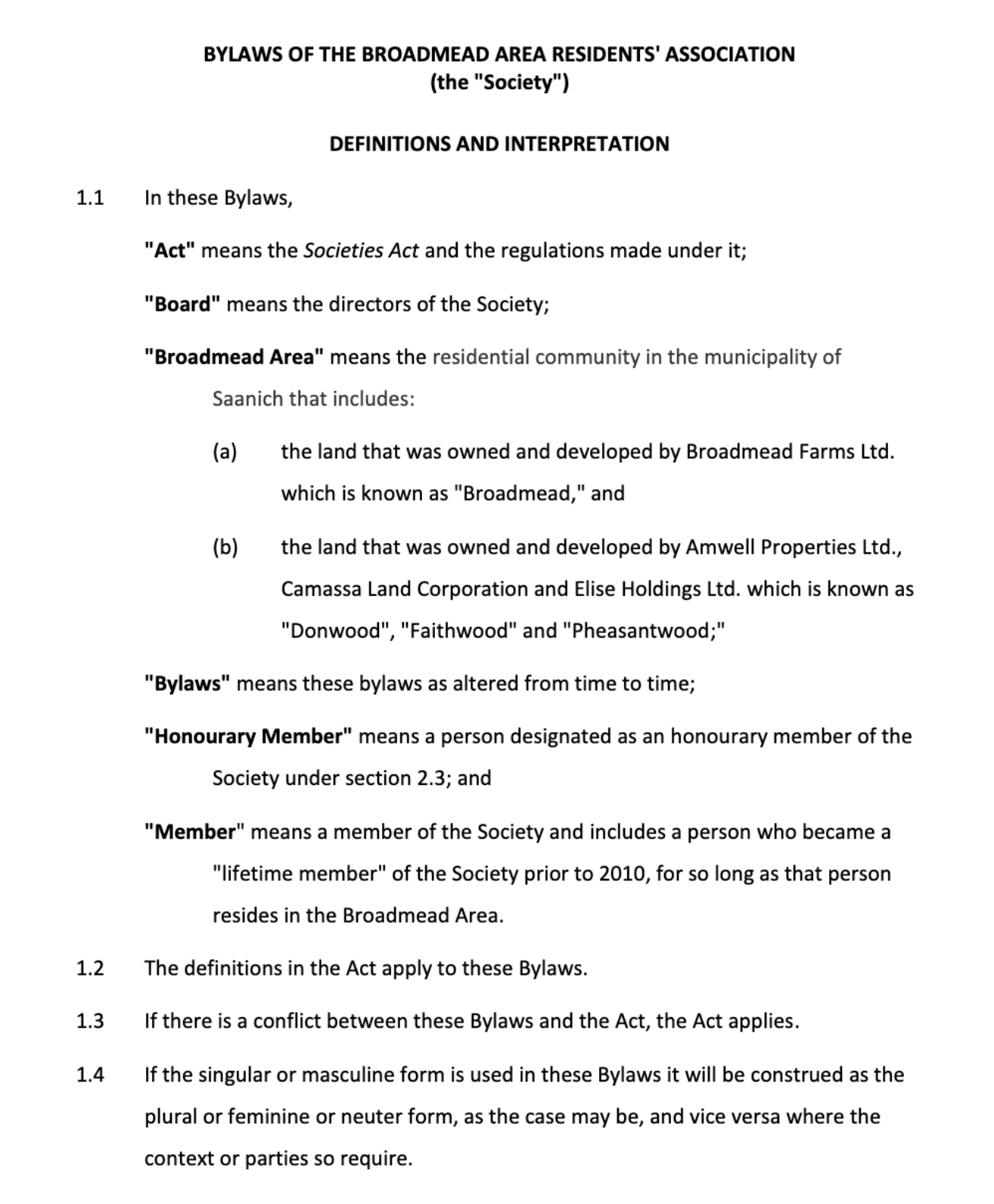 1. The name of the Society is Broadmead Area Residents’ Association.
2. The purposes of the Society are to:
(a) Protect and preserve the character of the Broadmead area based on its harmony with the natural environment.
(b) Advocate for the protection and enhancement of green spaces, parks, trails, trees and native flora.
(c) Offer assistance and guidance to residents of the Broadmead area in the management and enforcement of the statutory building schemes that are registered on title to their properties.
(d) Enhance the community by providing a forum for discussion as well as other community building activities.
(e) Represent the Society before the Corporation of the District of Saanich, the Capital Regional District and all other governmental authorities.

Limona Construction Ltd. (Limona) has applied to the District of Saanich to rezone and subdivide the property at 4590 Lochside Drive into 12 lots. BARA’s brief to Saanich opposing the application is posted below.

The BARA Board met with Limona for the first time on February 25 during which Limona outlined some minor revisions to its application. The changes do not address the major issues raised by various municipal departments, including Planning, Parks, and Engineering nor do they deal with the most important community concerns.

BARA understands that Limona will make no further changes. The next step is for Saanich Council to review Limona’s application. BARA has asked Saanich to inform us of the date it will appear before Council. so that BARA may make a representation to Council opposing the application.

Member Comments about the Development

This project will have several negative impacts on the Lochside Trail. As one member wrote to us, “The developers who want to build on this land are in conflict with the Lochside Trail which is heavily used by walkers, runners, and cyclists.”

Many were concerned about Lochside Elementary School students as there will be more vehicular traffic on Lochside Drive.

“Saanich does not do enough to ensure the safety of the students as it is. We walk to and from school daily and witness many violations and a constant disregard for the school speed zone. Add in school buses and the possibility of the proposed city bus additional route to Lochside Drive, and it’s just going to get busier.”

In 2009, Saanich Council rejected Limona’s proposal to subdivide the property into six lots. Limona had originally proposed an eight-lot subdivision, but reduced the number of lots in response to community concerns.

Unlike 2009, the current Council leans more towards accepting development projects that will add “affordable housing” to the community. Unfortunately, the label “affordable” seems to be applied to any development that adds housing stock.
We hope that this does not become a panacea that would lead some members of Council to approve almost any project regardless of its merits with respect to issues such as transportation, sustainability, the need to protect and expand cycling infrastructure, the preservation of public spaces, and ecological sensitivity.

Below is information about the proposed development at Lochside Drive. Click on an image to open the associated PDF in a new tab.